With nearly 22,500 hectares of woodland, this metropolitan area is truly a green destination!

Managed by the National Forestry Office and freely accessible to the general public, the state forests are part and parcel of the region’s very identity. Their choice location in the heart of the urban area and the meanders of the Seine means they offer a huge diversity of landscapes and natural habitats waiting to be explored. They also represent a vital timber resource and a whole biodiversity reservoir.

Although their prime purpose is to produce timber while preserving the other riches of the forest, they now also play an important environmental and social role among the 500,000 local residents. 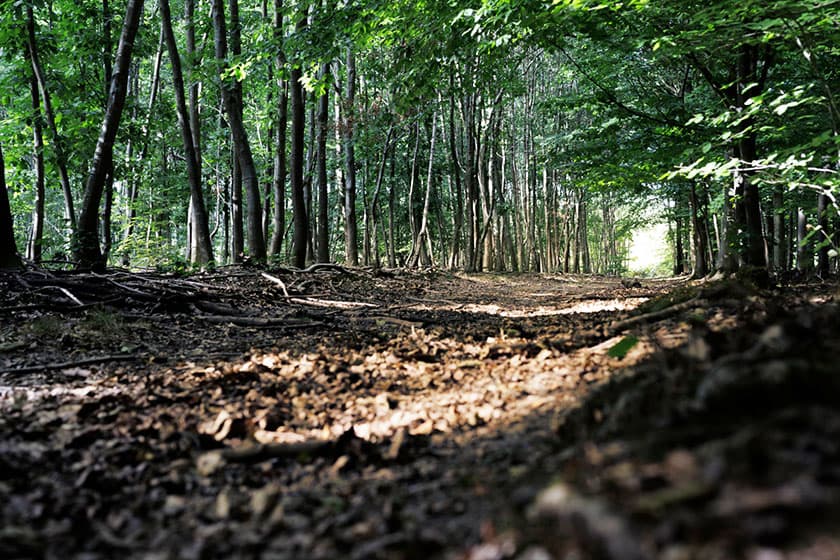 The Roumare state forest occupies virtually all of the loop in the river Seine located downstream from Rouen, on the right bank. Close to the urban area and present in nine municipal territories, it covers almost four thousand hectares.
Nowadays, it is more than half comprised of deciduous trees (57%), mainly beech and oak, the rest being resinous varieties, mostly Scots pine and black pine.
It has many clusters of very old trees (twenty-five hectares) that are conducive to the development of a specific biodiversity.

Felling operations are programmed under a “forest planning” management scheme drawn up every twenty years by ONF. This document is produced after a soil and vegetation analysis of each parcel. The work aims to determine which varieties are the most suitable, with climate change factored in. Felling operations to improve the quality of the forest take place every eight years on each parcel, to encourage diametrical growth in the best specimens of 20 to 130 years of age. This represents approximately 100 hectares per year. Felling for forest renewal makes it easier for seedlings to grow from the fallen seeds of tall trees that are gradually felled on reaching maturity. A volume of approximately 11 000 m3 of timber is harvested each year.

Forest animals: As in the other forests of Normandy, the wildlife features birds, bats, insects, amphibians and reptiles, as well as small and large mammals such as squirrels, martens, badgers, foxes, wild boar and deer, of which one of the region’s species is found only in this forest range.

The Petit Charme Arboretum
Intended for the scientific monitoring of trees in the context of climate change, the arboretum boasts around a hundred varieties from across the world. Some of these can be seen along a marked-out trail. The porch, built using the traditional Normandy timber-frame technique, is the result of a welfare programme carried out in 2009 by the French regional cultural affairs agency and the Turkish culture association of Canteleu.

The Zoo
Built by ONF and Métropole Rouen Normandie with the help of European funds (FEDER), the zoo features a 26-hectare enclosure where wild boar and various species of deer can be seen in their natural habitat.

The Ben Harrati fitness trail
This traditional fitness trail of 2.1 km, including a 900-metre section adapted for disabled users, is currently being discussed between ONF, Métropole Rouen Normandie and the town of Canteleu. It was named after a local young disabled man, an active member of the Handisport association who has largely contributed to spreading disability awareness among the public at large.

The Epinay pond
The forest range has around forty ponds of which Epinay is the most well-known. It is an important site in terms of both the environment and tourism.

Remarkable trees
In 2018, 13 remarkable trees were officially identified here and protected accordingly. They are highlighted across the metropolitan area to make them known to a wider audience. Hence, the Roumare forest invites visitors to admire the pine tree at the Arsène intersection, the majestic beech, the alliance trees, the Gadeau de Kerville oak, the ladder beech and the leaning hornbeams of Les Boscs.
Roumare has known several other remarkable trees that have since disappeared, such as the famous “Chêne à Leu” (or wolf oak) that used to stand near the intersection of the same name.

Biodiversity: The flora includes a number of unique and/or protected species, such as the greater spearwort, AKA water buttercup (ranunculus lingua) or the floating water-plantain (luronium natans), both of which are pond plants.

Its key role in the region’s scenic and environmental quality has been recognised with, among others, an official listing as a Protection Forest in 2007, followed by that of the Seine valley loop as a protected site in 2013. Since June 2015, the quality and reputation of Rouen’s three suburban forests - Roumare, La Londe-Rouvray and Verte - has been highlighted further by the granting of the « Forêt d’Exception » ® seal of approval. This award has been renewed in 2022.

More info on the Roumare Forest and heritage 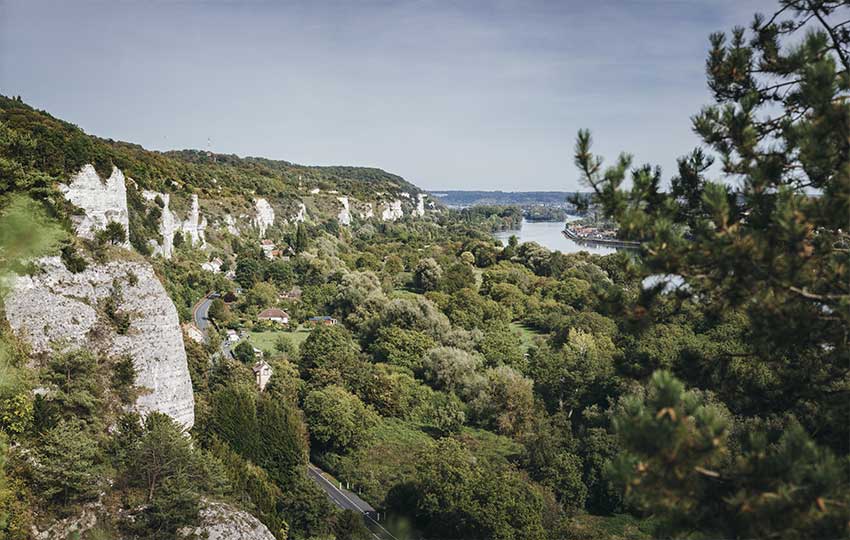 Originally stretching to the banks of the Seine, the forest of La Londe-Rouvray has lost much of its surface area over the centuries. Nevertheless, it remains a vast forest range within the metropolitan area, truly a green lung for the city and home to the Orival oppidum, among other riches, and the nearby ruins of the castle of Robert the Devil.

More info on the La Londe-Rouvray Forest and heritage

This forest of roughly 3,000 hectares stands to the west of Rouen, inside the Boucles de la Seine Normande Regional Nature Park. Hikers will appreciate its hilly terrain and multiple viewpoints overlooking the Seine.

Formerly known as Silveison Forest, for a long time this forest belonged to the Saint-Ouen Abbey of Rouen. It wasn’t until the French Revolution that it became state-owned. For decades, the Forêt Verte has been the scene of regular felling operations, but that doesn’t prevent its old beech trees, which are currently being renewed, from providing some beautiful timber. Managed by ONF on behalf of the State, the forest’s exploitation remains significant, producing approximately 10,000 m3 annually while striking an essential balance with the forest’s other roles. In addition, as a protector of habitats and landscapes, this forest has a role to play in the organisation of water resources in the regions that lie below the plateau (Notre-Dame de Bondeville and Le Houme).

More info on the Green Forest and its heritage

For more information about these forests managed by the National Forestry Office, or to consult the hunting calendar, please visit the website www.onf.fr or contact the regional forestry agency in Rouen: ag.haute-normandie@onf.fr.

Activities at the Forestry Centres 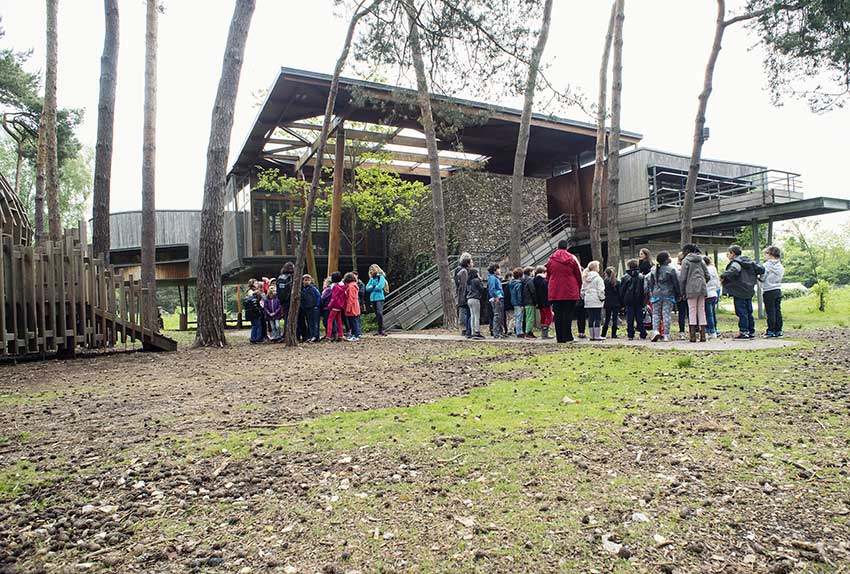 To provide activities in these forests, Métropole Rouen Normandie has created specialised centres, or “Maisons des Forêts”, in Orival, Saint-Etienne du Rouvray and Darnétal. Despite fire damage to the latter in December 2021, the sector still benefits from activities organised at facilities made available on the premises of the Sotteville-lès-Rouen leisure centre. A temporary building will soon be installed at the Ecopolis site, pending its final reconstruction. Throughout the year, activity leaders organise a whole programme on the topic of Normandy wildlife and vegetation, including night walks, creative workshops, exhibitions, school outings, introductory sessions, environment courses and early-learning nature activities.
Discover the many forests located around Rouen through a whole host of activities for children. An invitation to return with family or friends to exchange knowledge on the local fauna and flora.

Hiking in the metropolitan area